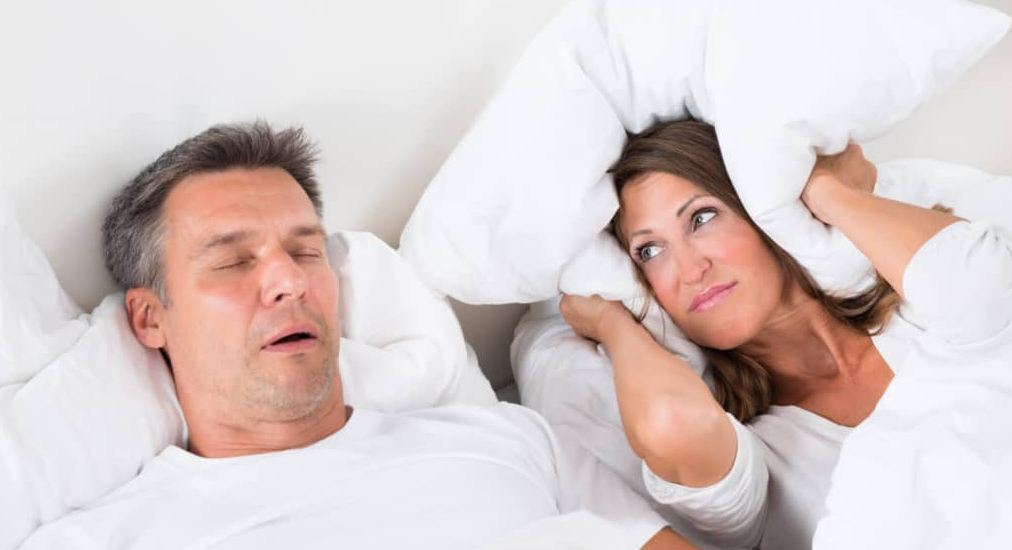 When it comes to increasing health and function, sleep should almost always be your first point of call.

Seriously, many people don’t realise it, but poor sleep quality has been linked to an increased rate of weight gain and an associated difficulty losing fat mass, a heightened risk of cardiovascular and metabolic disease, an increase in mental health issues such as depression and anxiety, in conjunction with global declines in health.

To put it mildly, sleep is damn important.

And there is nothing more disrupting to sleep than snoring.

Whether it be yours or your partners, snoring can lead to wakefulness, an inability to fall asleep, and even difficulty breathing during sleep – all of which can contribute to rapid declines in health and function.

But fortunately for us, snoring is not a death sentence.

If we were to it it in a somewhat technical sense, snoring is ultimately the sound created by the vibration of your respiratory structures, which occurs when the air movement within those structures becomes congested during sleep.

In some cases, the sound created can be quite soft and barely audible, although (as many of you would know) most of the time it is more likely to be loud and unpleasant.

With this in mind, snoring can seriously disrupt the sleep patterns of those around you. This can obviously lead to a reduction in sleep duration, in conjunction with an associated decline in sleep quality.

As a result, it is not uncommon for snoring to place unwanted stress on people’s relationships, while also increasing partner irritability throughout the day. This can further impact the health of your partner in a big manner – which is obviously not a good thing.

Interestingly, within this snoring can also have a seriously negative impact on the snorer, as well.

What Impact Does Snoring Have on Your Health?

The impact that snoring can have on your partner is pretty obvious.

Does Snoring Cause Sleep Apnea?

Sleep apnea is a rather interesting disorder that occurs when your breathing is uncontrollably interrupted during sleep. This can be the result of periods comprised of excessively shallow breathing, or short periods consisting of the complete cessation of breathing– both of which lead to sudden awakening throughout the night.

While snoring doesn’t cause sleep apnea per se, there is evidence to suggest that it does act as a precursor to the disease, with those people suffering from severe snoring more likely to develop the disorder in the future.

Considering this, if your snoring is getting worse, it may point to the onset of sleep apnea.

Does Snoring Cause Sleep Heart Disease?

There is evidence to suggest that chronic snoring can actually increase the occurrence of plaque build-up up on the walls of your arteries (a disease known as ‘atherosclerosis’). This increased plaque causes your arteries to narrow, which in turn inhibits natural blood flow.

This increase the amount if stress place on the heart each and every beat, while also causing a rise in resting blood pressure levels. Through an interaction of these factors, snoring has been linked to declines in cardiovascular health, combined with an increased risk of heart disease, incidence of stroke, and incidence of heart attack.

GERS describes a nasty and chronic condition where the contents of the stomach sometimes flow backwards though the digestive system and up into the oesophagus (the large tube that moves food from your throat and down into your stomach).

Given that the stomach contains a number of potent digestive acids, this can lead to serious discomfort and irritability of the throat and mouth. Moreover, if GERD occurs during sleep there is also an associated risk of drowning.

Now, people who snore severely and regularly have been shown to have an increased risk of developing GERD due to the disordered way in which they breath during sleep. The pressure changes that occur during their laboured respiration can physically suck the contents of their stomach back up into their oesophagus, causing GERD and its associated health implications.

Does Snoring Cause Mental Health Issues?

While the physical mechanism behind snoring doesn’t directly affect mental health, the sleep deprivation it causes certainly does. We need sleep to help us recover and recuperate every single day.

As a result, without it, we see huge declines in health.

With this in mind, there is evidence to suggest that those individuals who suffer from severe snoring are at a much great risk of developing mental disorders such as depression and anxiety. Additionally, these same individuals typically experience daily declines in mood.

In a very similar vein of thought to the above point, snoring can also impact general cognitive ability in a rather negative manner.

You see, those individuals who snore (and therefore have limited sleep quality as a result) appear to develop limitations in problem solving, inhibitions in short and long-term memory, and declines in both reasoning abilities and learning capabilities.

Again, while this isn’t directly caused by the physical mechanisms of snoring, it is certainly the result of the impact that it can have on sleep quality and duration.

With all of the above, there is also evidence to suggest that snoring can indirectly lead to weight gain.

Snoring leads to come rather severe disruptions in sleep. This means that throughout the nights duration, you will spend less time in a state of deep (or restorative sleep). This can cause significant reduction in energy levels, while also causing some rather serious alterations in your hormone levels – namely driven by an increase in cortisone secretion.

Through these two mechanisms, your body will be more prone to store energy as fat, and you will be less prone to undertaking physical activity. All of which creates the perfect situation for excessive and unwanted weight gain.

And finally, poor sleep resulting from snoring has been shown cause chronic increases in inflammation across the entire body. While this inflammation can indeed impact nearly every facet of health, there is recent evidence demonstrating that it can have a particularly negative effect on libido and sex drive.

How to Stop Snoring Naturally

So, we know that snoring can impact both your sleep quality and the sleep quality of your significant other. We also know that this can wreak absolute havoc with your health, while adding potential stress to your relationship.

But fortunately for you it is certainly not a death sentence. In fact, there are a number of different steps that you can take to help you heal your snoring in a completely natural manner.

Start Sleeping on Your Side

When most of us think of good sleeping position, we tend to think about sleeping on our back. And this is because sleeping on your back has long been suggested to help maintain musculoskeletal health, while also assisting stave off low back pain.

However, it doesn’t appear to be all that good for snoring.

You see, there is research demonstrating that sleeping on your side can reduce the incidence of snoring.  This position can prevent the muscles of the throat from blocking your airways, thus reducing the vibrations that they can cause.

Therefore, by proving a more natural position for your airways, sleeping on your side can reduce the severity of your snoring and help improve sleep duration and sleep quality.

Excess weight has the capacity to compress the lungs and chesty during sleep. This can lead to an increased risk of airway obstruction, while simultaneously causing the nasal passages to narrow and become smaller. The combination of these two factors can make it challenging to move air through the respiratory system, leading to the onset of snoring.

As a result, managing your weight an ensuring that your BMI remains within a health range (18 – 25, for those who are interested in the exact values) is a fantastic way to reduce the severity of your snoring, and cause associated improvement in sleep.

Alcohol is known to exhibit a relaxant like effect on your muscle tissue, while also reducing the activity of the nervous system throughout the body. As a direct result of these two distinct mechanisms, drinking alcohol before bed can reduce the tone of the muscles within the respiratory tract and through – which can lead to the onset of snoring.

Taking this into consideration, trying to avoid alcohol before bed is a great way to reduce snoring and improve sleep in the process.

Not only does it have the ability to make the tissue of the body stronger and more resilient, but it also offers a surefire way to stave off disease and illness, while also improving cognitive function, mood, emotional wellbeing, and mental capacity.

It truly is a panacea.

As one might suggest, regular aerobic exercise has been shown to improve the capacity and function of the respiratory and airway musculature, reducing their likelihood of becoming obstructive during sleep. As such, regular exercise has been shown to help reduce severity of snoring, irrespective of the additional effects it may have on weight loss.

Now, if it comes as no surprise that exercise will help snoring, then it should certainly not be a shock to hear that smoking makes it worse!

Exposure to smoke (either through smoking or indirect inhalation) has been shown to significantly worsen the severity of snoring. This ultimately comes down to the fact that the chemical found in smoke can cause irreversible damage respiratory tissue, inhibiting airflow into the lungs in a very severe manner.

So, if you are after a simple way to improve the symptoms of your snoring and help you sleep a whole lot better, stop smoking.

If the sinuses become blocked, your airways can become obstructed and can therefore limit airflow into and out of the lungs.  In response, the mouth will open to allow you to breathe, which can increase airway vibration and snoring.

However, the regular supplementation of Vitamin C may help prevent this by assisting the immune system maintain healthy and clear sinus passageways.

The impact of diary on snoring is twofold.

Firstly, after consumption dairy can leave a thin layer of mucus across the surface of both your mouth and your throat. This mucous adds to the blockage of the airways by resisting the flow of air through the respiratory system.

Secondly, dairy products are both filling and rather slow to digest. As a such, they fill the stomach quite easily. If your stomach is full, it can place unwanted pressure on your diaphragm, inhibiting what we would describe as ‘normal’ and ‘rhythmic’ breathing.

Through each of these mechanisms, eating dairy before bed can make your snoring worse.

And last but not least, we have air humidifiers.

Air humidifiers are a specific device that increase the moisture content with the air. Now, as dry air has been shown to irritate the respiratory system and limit airflow, a humidifier can improve breathing capabilities by enhancing the ability of the air to traverse your airways.

As a result, they offer a great way to reduce the severity of your snoring.

This air humidifier by Pure Enrichment is honestly one of the most cost effective and efficient on the market.

Snoring can place a whole lot of stress on both your partner and your health, causing an increased risk of disease and illness, reducing cognitive function and mental health, inhibiting libido and sex drive, while also promoting weight gain.

But, there is an answer.

The tips outline in this article provide the best methods of helping treat your snoring naturally. If you have had any experience with any of these methods, then we would love to hear about it – so drop us a comment and we will get back to you ASAP!